Kim BINSTED: "The Journey to Mars: The risks of long-duration human space exploration, and how we are overcoming them" (14. 10. 2019)

Professor Kim Binsted, a researcher and lecturer at the University of Hawaii, will have a Monday seminar titled "The Journey to Mars: The Risks of Long-Lasting Human Space Exploration, and How We Are Overcoming Them." 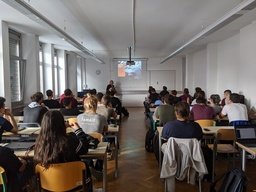 Monday Computer Science seminar is organised Departments of Information sciences and technologies of UP FAMNIT in UP IAM.

Kim Binsted received her BSc in Physics at McGill (1991), and her PhD in Artificial Intelligence from the University of Edinburgh (1996). Her thesis topic was the computational modeling and generation of punning riddles, and her program, JAPE (Joke Analysis and Production Engine), generated puns such as "What do you call a Martian who drinks beer? An ale-ien!". She then went to Japan, where she conducted research at Sony's Computer Science Laboratories on human-computer interfaces, and then started a company, I-Chara KK, which developed social software agents for mobile phones. In 2002, she joined the faculty of the Information and Computer Sciences Department at the University of Hawaii, where she does research on artificial intelligence, human-computer interfaces, and long-duration human space exploration. In 2015, she received a MS in Planetary Geology, for attempting to characterize the deuterium-hydrogen ratio in the primitive Earth mantle.
Kim is a co-investigator at the UH-NASA Astrobiology Institute, which formed in late 2003. She was a NASA Summer Faculty Fellow at Ames Research Center in 2003 and 2004, where she worked on sub-vocal speech recognition technology in the Neuroengineering Lab. She was Chief Scientist on the FMARS 2007 Long Duration Mission, a four-month Mars exploration analogue on Devon Island in the Canadian High Arctic. In 2009, she spent her sabbatical as a visiting scientist at the Canadian Space Agency (CSA), working on the CSA's planetary analogues program. She spent the summers of 2016 and 2017 in Russia on a Fulbright Award. She is now the principal investigator for the NASA-funded HI-SEAS (Hawaii Space Exploration Analog and Simulation) program, which conducts long-duration space exploration simulations at an isolated habitat on Mauna Loa. She is currently serving as an AAAS Science and Technology Policy Fellow in Senator Whitehouse's office in Washington, DC.

Title: *The Journey to Mars: The risks of long-duration human space exploration, and how we are overcoming them*

Long space journeys, such as the trip to Mars, pose unique risks to the human body and mind. I will describe efforts by myself and others to mitigate those risks and enable long-duration human space exploration. In particular, I will discuss research conducted at HI-SEAS (Hawaii Space Exploration Analog and Simulation, hi-seas.org).