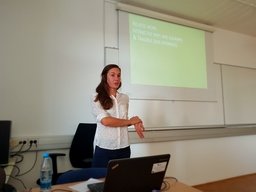 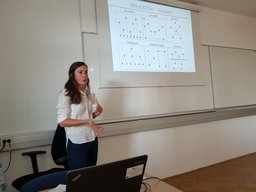 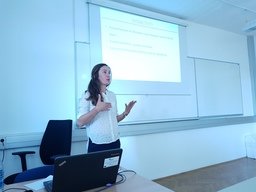 Predavateljica: Julie DUCASSE
Julie Ducasse holds a PhD in Human-Computer Interaction. She studied in France at The University of Toulouse. Since September 2018, she is a post-doctoral researcher at UP FAMNIT and works for the HICUP Lab as well as for InnoRenew.

Povzetek:
A variety of approaches exist to make these geographical and graphical representations accessible to visually impaired users, whether traditional or technological. Technological approaches can rely on digital representations only (with audio and haptic feedback) or on digital and physical representations (with tactile feedback). While digital representations have the great advantage of being instantly updatable, they provide very limited tactile feedback, which makes their exploration cognitively demanding and imposes heavy restrictions on content. On the other hand, most prototypes that rely on digital and physical representations allow for a two-handed exploration that is both natural and efficient at retrieving and encoding spatial information, but they are physically limited by the use of a tactile overlay, making them impossible to update.
Within the framework of the AccessiMap project, we proposed to bridge the gap between these two approaches by investigating how to develop physical interactive maps and diagrams that support two-handed exploration, while at the same time being updatable. To do so, we built on previous research on Tangible User Interfaces (TUI). Based on the design, implementation and evaluation of three tabletop TUIs (the Tangible Reels, the Tangible Box and BotMap), we proposed innovative non-visual interaction techniques and technical solutions that could serve as a basis for the design of future TUIs for visually impaired users. Notably, we investigated how tangible maps and diagrams can support various tasks, ranging from the (re)construction of diagrams to the exploration of maps by panning and zooming.